A new five-storey laboratory and office building will rise at the Cambridge Biomedical Campus* after plans for its construction were approved by councillors.

The new structure at 1000 Discovery Drive will mark the second development in phase two of plans to expand the Biomedical Campus. It will feature a public workspace and cafe, as well multi-let office and lab space intended to encourage a creative working environment.

Speaking about the new laboratory and office building, Andrew Blevins, the managing director for Liberty Property Trust UK, which together with Countryside Properties are the main developers of the phase one and phase two expansion of the Cambridge Biomedical Campus, said it “will provide space for industry start-ups, university spin-outs and healthcare entrepreneurs to grow their ventures side by side on the campus with some of the brightest minds in life sciences”. 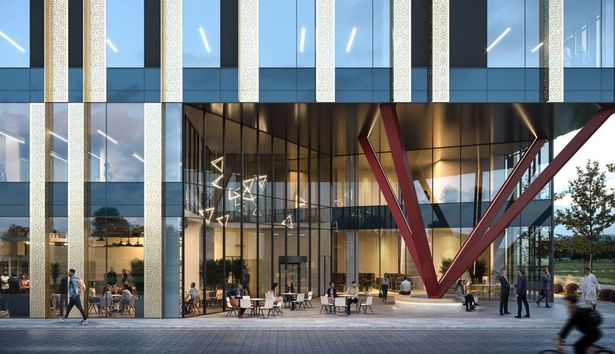 One of the building’s most prominent features will be its eye-catching entrance, which will be fronted by a “red architectural tree” (as depicted above). According to Cambridge City Councillor Damien Tunnacliffe, the red abstract tree structure symbolises “the connection between structure, building and science and represents a place of innovation and future thinking”.

Located next to the existing Abcam building, the new lab and office space will also include a temporary car park with 146 spaces. Once phase two of the Biomedical Campus expansion has been sufficiently completed, two multi-storey car parks will be built. There will also be ample parking for bicycles.

The construction of the new laboratory and office space was given the green light by Cambridge’s joint development control committee, which is made up of councillors from Cambridge City Council and South Cambridgeshire District Council. The committee voted unanimously on January 20 to approve Cambridge Medipark Limited’s application.

To keep up to date with all of Cambridge Biomedical Campus’ news, follow them on Twitter: https://twitter.com/CamBioCampus