It’s more than 20 years since Sony’s Aibo robotic dog was released (yes, it was really that long ago!) and a recent reboot of the lovable ‘pet’ proved that interactive companions are still popular. But what if you’re more of a cat person?

Well… the MarsCat could be what you’re looking for.

Developed by Chinese firm Elephant Robotics, the MarsCat features 16 motorised joints which allow it to autonomously move around its owner’s home. It’ll also perform activities such as sleeping, playing and even burying imaginary cat poo in a litter box.

By utilising its nose-mounted camera, a depth-sensing laser and a microphone, the MarsCat can recognise and interact with three toys (included), avoid obstacles as it goes and respond to a range of voice commands.

But that’s not all… the MarsCat’s brain – a Raspberry Pi microprocessor – allows it to develop a unique personality based on how its owner treats it. For example, the more the owner talks to their MarsCat, the more the robot companion will meow over time. In fact, there are six character traits that each MarsCat can display as they grow: enthusiastic or aloof, energetic or lazy and social or shy.

Furthermore, the MarsCat’s open-source nature means techie owners can create and share software hacks for the robot – should be pretty interesting to see some of the results going forward.

You can find out more about the MarsCat on the official Kickstarter page*. And if you really want one, consider pledging your support for the project as you’ll save 50% over the intended RRP when they go on sale.

Here’s the MarsCat in action:

What do you think? Are people really going to spend $1,299 (c. £990) on a MarsCat, or are the Kickstarter campaign backers going to be the only MarsCat owners going forward? Tweet us @PolytecNews 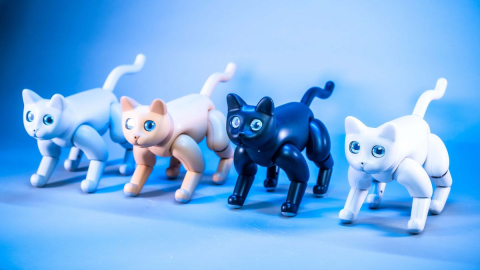 Delivery Drones Could Quadruple Their Effective Range Using Buses Stanford Study University Of Cambridge Announces AI & Machine Learning Accelerator Programme UK Leading the World in Online Safety Tech What Will Office Life Be like in a Post-COVID World? The ground-breaking Terminator rubber that can heal itself 5 Tips to Help You Ace Online Job Interviews 4 Ways to Use the Time Right Now to Up Your Job Hunting Game Japanese Team Develops Plant-based Plastic That Biodegrades in the Ocean Cambridge Attracted More Tech Investment than London in 2019 Cambridge Scientists Develop World First App to Aid Type 1 Diabetes Management New Supercapacitor Could Lead to Electric Vehicles Charging in Just 10 Minutes British Biotech Firm Releases GM Moths to Help Curb Crop Damage World's Strongest Robotic Hand Can Gracefully Play the Piano with Its Human-like Fingers Top Tech Job Hunting Tips for 2020 Introducing Wahu: The Adaptive Sole for your Shoes MarsCat: The Interactive Robotic Pet for Feline Fans From Tiny David to Impressive Building: Is There Anything 3D Printing Can't Do? New App from Cambridge Firm Set to End Queuing at the Bar Unocup: The foldable paper cup that doesn't need a plastic lid Epidermal VR: The touchy feely Virtual Reality tech Smart contact lenses: We've seen the future (and it's awesome) Trimbot: The garden maintenance robot that prunes & trims (so you dont have to) Swarm of tiny drones could save lives by exploring unknown environments Cambridge-based team creates artificial leaf capable of producing clean fuel Less than a quarter of young people understand what engineers do (and it's adding to the talent shortfall) Cambridge-developed oral smart pill for dogs takes samples as it passes through them Facebook wants to read your mind (no really, it does) BodyNet: A new generation of wearable health tech Introducing the BoringPhone: The Minimalist smartphone Worlds first raspberry-picking robot shows what its capable of How to Write a Resignation Letter: A 3-Step Guide Cover letter writing tips - how to get noticed Know Your Rights At Work How To Optimise LinkedIn For Your Job Search 8 tips to help you nail that job interview! Job hunting tips for the festive season Your top 5 CV FAQ's answered Cambridge United Competition Wild Motorcycle ! First driverless cars, now driverless motorcycles ... but why? World Cup Merchandise up for grabs Let your Business Card show your talent ! Opportunities For Inventors Wing Flapping Robot flies gracefully