Jaguar Land Rover (JLR) and the University of Cambridge are collaborating on the development of a new contactless touchscreen technology, which is designed to promote safer driving and reduce the spread of germs, bacteria and viruses in a post-COVID world.

The patented technology, known as ‘predictive touch’, uses sensors and Artificial Intelligence (AI) to sense where the driver is aiming for on the touchscreen e.g. entertainment controls, satellite navigation or temperature settings.

Before the driver has actually touched the screen the technology carries out the intended command. The developers say lab-tests and on-road trials have shown the technology to reduce a driver’s touchscreen interaction effort and time by as much as 50%. In addition, by eliminating the need to actually touch the screen, the system will help reduce the potential spread of infections between people who use the technology.

Using radio frequency-based or vision-based sensors, the gesture tracker incorporated in the system identifies where a driver intends to touch early on in the pointing task, speeding up the overall interaction.

While the predictive touch technology has been developed primarily with vehicle applications in mind — it already features in the Destination Zero vision of the Jaguar Land Rover — its possibilities are endless. For example, it could lead to contactless ATMs, railway ticket machines, airport check-ins, supermarket self-serve checkouts and many other uses. In a post-COVID world where social distancing and regular handwashing will still be commonplace, such breakthroughs could play a huge role in limiting the spread of infections.

“The technology also offers us the chance to make vehicles safer by reducing the cognitive load on drivers and increasing the amount of time they can spend focused on the road ahead”.

You can see the technology in action in this video from Cambridge University:

What do you think? Will contactless touchscreens be a feature in most vehicles going forward, or will consumers still prefer to physically touch a screen? Tweet us @PolytecNews 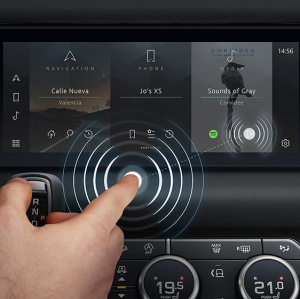 Amazon Continues to Invest in Cambridge by Creating a New Team Focussed on Amazon Scout Cambridge Entrepreneur One of Four Winners in Women4climate Tech Challenge 2020 Over 75% of Space Junk from Unknown Origins Cambridge researchers develop wireless device that makes clean fuel from Co2 and sunlight Scientists Use Orange Peel to Extract Valuable Metals from Spent Lithium-Ion Batteries UK and Japanese Engineers Shatter Internet Speed Record Introducing Theia: The Handheld Robotic Guide Dog The Tiny Camera That Can Take 3D Pictures Inside Your Blood Vessels JLR and Cambridge University Develop Touchless Touchscreen Technology Huawei Given Nod for 1bn Cambridgeshire R&D Facility Delivery Drones Could Quadruple Their Effective Range Using Buses Stanford Study University Of Cambridge Announces AI & Machine Learning Accelerator Programme UK Leading the World in Online Safety Tech What Will Office Life Be like in a Post-COVID World? The ground-breaking Terminator rubber that can heal itself 5 Tips to Help You Ace Online Job Interviews 4 Ways to Use the Time Right Now to Up Your Job Hunting Game Japanese Team Develops Plant-based Plastic That Biodegrades in the Ocean Cambridge Attracted More Tech Investment than London in 2019 Cambridge Scientists Develop World First App to Aid Type 1 Diabetes Management New Supercapacitor Could Lead to Electric Vehicles Charging in Just 10 Minutes British Biotech Firm Releases GM Moths to Help Curb Crop Damage World's Strongest Robotic Hand Can Gracefully Play the Piano with Its Human-like Fingers Top Tech Job Hunting Tips for 2020 Introducing Wahu: The Adaptive Sole for your Shoes MarsCat: The Interactive Robotic Pet for Feline Fans From Tiny David to Impressive Building: Is There Anything 3D Printing Can't Do? New App from Cambridge Firm Set to End Queuing at the Bar Unocup: The foldable paper cup that doesn't need a plastic lid Epidermal VR: The touchy feely Virtual Reality tech Smart contact lenses: We've seen the future (and it's awesome) Trimbot: The garden maintenance robot that prunes & trims (so you dont have to) Swarm of tiny drones could save lives by exploring unknown environments Cambridge-based team creates artificial leaf capable of producing clean fuel Less than a quarter of young people understand what engineers do (and it's adding to the talent shortfall) Cambridge-developed oral smart pill for dogs takes samples as it passes through them Facebook wants to read your mind (no really, it does) BodyNet: A new generation of wearable health tech Introducing the BoringPhone: The Minimalist smartphone Worlds first raspberry-picking robot shows what its capable of How to Write a Resignation Letter: A 3-Step Guide Cover letter writing tips - how to get noticed Know Your Rights At Work How To Optimise LinkedIn For Your Job Search 8 tips to help you nail that job interview! Job hunting tips for the festive season Your top 5 CV FAQ's answered Cambridge United Competition Wild Motorcycle ! First driverless cars, now driverless motorcycles ... but why? World Cup Merchandise up for grabs Let your Business Card show your talent ! Opportunities For Inventors Wing Flapping Robot flies gracefully