Japanese Team Develops Plant-based Plastic That Biodegrades in the Ocean

Unless we do something radical, by 2050, there will be more plastic in the ocean (by weight) than fish. That was the stark warning issued in a report by the Ellen MacArthur Foundation* back in December 2017.

Furthermore, plastic waste has been found in the stomachs of the deepest sea creatures, nearly 11km down in one of the most remote places on the Earth – a reality that highlights just how severe the planet’s plastic issue has become.

Whether it’s clogging marine animals’ stomachs or forming large slicks on the surface of the ocean, the bottom line is that plastic is now a major concern.

In an attempt to reduce the impact of plastic on marine environments, a team from Japan’s Osaka University** has developed a plant-based plastic that harmlessly biodegrades in the ocean. Made from cellulose nanofibers and starch – both obtained from plants – the biodegradable plastic boasts both high strength and excellent water-resistance.

While biodegradable plastics aren’t exactly anything new, the ones that have been being produced to date have three main drawbacks:

They are often of inferior quality compared to conventional plastics
Cost over twice as much to produce
Can only be manufactured in relatively small amounts.

That’s why the team from Japan was determined to develop a superior product that can be put to practical use in the near future.

As a final bonus, because the plastic isn't petroleum-based, producing it shouldn't produce any greenhouse gases.

Speaking about their plant-based plastic, team leader Associate Professor Taka-Aki Asoh said: “We have great expectations that our material will help solve the growing global problem of marine debris accumulation and have a major societal impact.”

Would you opt for a plant-based plastic over a more conventional type? What if there was a slight price difference? We’d love to hear your thoughts… Tweet us @PolytecNews 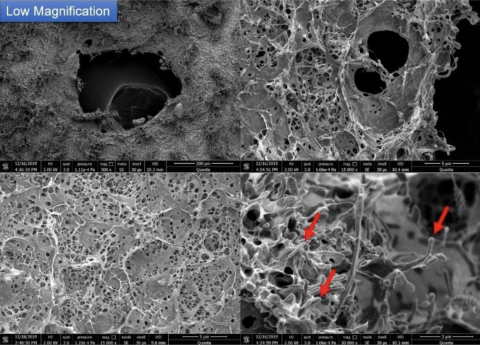