Introducing the BoringPhone: The Minimalist smartphone

How many times do you look at your smartphone on an average day? For many people, their smartphones are the first thing they reach for when they wake up and the last thing they put down at night.

In fact, research from Deloitte* shows that a staggering 85% of 16-75-year-olds in the UK now either own or have access to a smartphone. It’s safe to say that smartphones have become an intrinsic part of modern life.

That’s why the BoringPhone** is such an interesting crowdfunding project.

Designed to be significantly more capable than a basic candy bar phone, but a lot less distracting than the powerful smartphones we’ve all come to know, the BoringPhone runs a customised (you could say boring) version of Android.

According to its creator, “the BoringPhone is a minimalist smartphone with all the useful things, but none of the distracting stuff.” Sounds good so far. But what do you actually get?

Well, for a start there’s no email, Internet browsing or social media apps – actually, there’s not even an app store to tempt you!

What you do get, though, is a 5.5″ display, a Snapdragon 625 processor, 4GB RAM, 32GB storage, Bluetooth support, a 12MP camera, a Micro SD card slot and a USB-C port for charging. Then there’s the usual stuff like messaging, voice and video calling and audio support for listening to music and podcasts.

Perhaps the most noticeable difference between the BoringPhone and most other smartphones is the former’s very bland operating system. With just greyscale icons and no fancy wallpaper, the BoringPhone is, well, rather boring.

But that’s the whole point!

So if you want to be less tempted by your smartphone and go back to basics without losing complete functionality, maybe you should consider the BoringPhone. Check out the official Kickstarter*** page for more info. 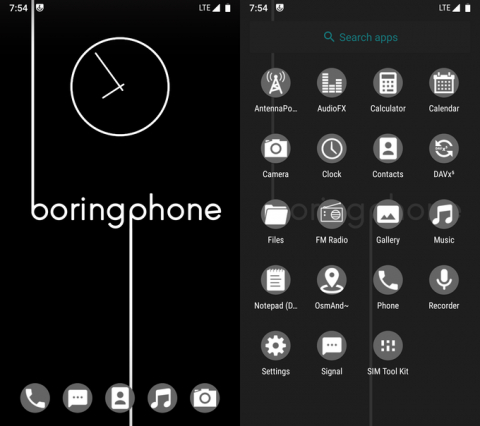 Follow our social media profiles to stay updated with all our news and developments.