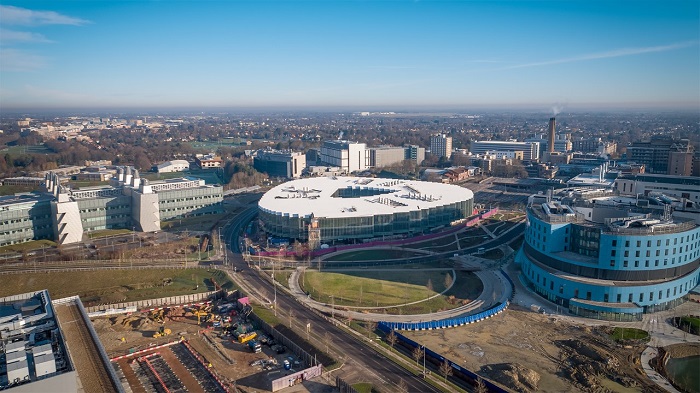 Cambridge Biomedical Campus (CBC), the largest employment site in Cambridge, has published its emerging Vision for the future evolution and development, including plans to double its workforce over the next 20 years.

By 2041, the CBC will nearly double in size as the city “strains at its borders”. The campus, which is home to Cambridge University, AstraZeneca, and Addenbrooke's Hospital, will increase its workforce from more than 20,000 to between 34,000 and 40,000.

Outlined in a report setting out the vision for the site as a healthcare and innovation hub, the campus’s growth will include a new cancer hospital and a new children’s hospital. Furthermore, the report also says there should be spaces such as cafés or gyms for people to meet and build relationships in, as well as hotels and conferencing facilities.

‘Even taking a moderate view’, the report says the need from research and development businesses would require expansion of between 100,000 and 150,000 square feet gross internal area per year, which would equate to almost 20,000 new individuals.

The report highlights that despite there being more than 30 science parks and hubs within 10 miles of Cambridge city centre, the city is ‘straining at its borders. It adds that science parks are full, with vacancies in high demand from businesses globally, all keen to tap into the ‘talent that Cambridge cultivates’.

Jan Löwe, Director at the MRC Laboratory of Molecular Biology, said: “The CBC is an incredibly unique location, with the power of complementary institutions co-locating together, helping us to translate world-leading science into healthcare and jobs for local people. We should never take this for granted, and so it’s hugely important that we set a course for this work to continue to prosper.

“The CBC will only continue to innovate, succeed and deliver by integrating more closely with Cambridge and local communities. We hope that our conversation with local groups demonstrates our commitment to this course. We want to grow in a way that delivers benefits beyond the great work of CBC partners, creating a welcoming environment for everyone.”

If you want to find out more and/or feed back your views on the CBC’s vision, you can do so here: https://www.cbc-vision.co.uk/