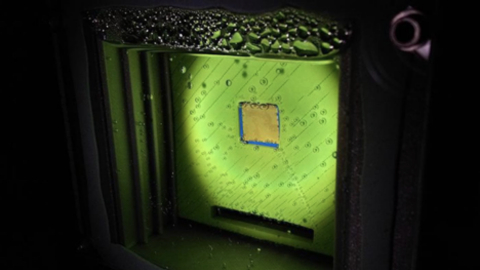 Scientists have created an artificial leaf that can mimic photosynthesis, allowing it to turn sunlight carbon dioxide and water into energy.

The leaf, developed by researchers at Cambridge University, is capable of creating synthetic gas (or syngas) and doesn’t release any carbon dioxide in the process – unlike current production methods that involve fossil fuels.

While you may not have heard of syngas, chances are you have bought products that were created using it, including fuels (like diesel), pharmaceuticals, plastics and fertilisers.

The artificial leaf is powered by sunlight, although it still works just as well on rainy and overcast days. It features two light absorbers, similar to the molecules in plants that harvest sunlight, which are combined with a catalyst made from cobalt.

When the two light absorbers are placed in water, one uses the catalyst to produce oxygen. Meanwhile, the other carries out the chemical reaction that reduces carbon dioxide and water into carbon monoxide and hydrogen – two gases that can then be combined into syngas.

Speaking about the artificial leaf, Professor Erwin Reisner, from Cambridge University’s Department of Chemistry and a senior author of the research, said: “Being able to produce it sustainably would be a critical step in closing the global carbon cycle and establishing a sustainable chemical and fuel industry.”

Virgil Andrei, a PhD student and first author of the paper, said the artificial leaf can be used from “dawn until dusk, anywhere in the world,” making it a potentially viable option globally.

The Cambridge-based team are now looking at ways to use their technology to produce a sustainable liquid fuel alternative to petrol, so the demand to power heavy transport, shipping and aviation can be met sustainably.